This is all especially hilarious since I’m basically a walking food meme. My brain generally runs like one of those Tasty videos where someone’s baking ham & cheese sliders in a baking pan full of butter before smothering them in Béchamel.

I did all my shopping, I planned the next chunk of days’ worth of food. NO, I did not follow recipes, because I am a stubborn ass.

The shopping is HARD. It’s not just sugar and other sweeteners that are in friggin’ everything that makes this shit a beast. Soy products. Soybean oil. Goddamn soy sauce. In SO MANY THINGS. And if by some miracle the condiment you’re scanning has neither a sweetener nor soy, BAM, that shit’s got sulfites. “Surely my simple dijon mustard will be compliant, right?” WRONG, motherfucker, that shit has white wine in it, which means SULFITES. At least a lot of times it’s clearly labeled now and doesn’t make me go, “Wait… is that a sulfite? WTF is a sulfite? Is EVERYTHING a sulfite???”

(I’m really salty — no pun intended — about not being able to have soy sauce. Because the lamest trick the devil ever pulled was convincing some people that coconut amino stuff tastes like soy sauce. IT DOES NOT. However, I think that if I mix some with my expensive new Red Boat fish sauce, it might achieve the desired saltiness.)

Anyhow, I wanted to bring up a couple traps that might get you into trouble during food prep when you’re starting out…

Food-Prep Trap #1: “Hmmm, I’ve got some dishes in the sink… I’ll just wait and do them later, since I’ll be doing dishes after I food prep anyway.” NO. NO, STUPID. NO, LAZY STUPID. Do you really want to add ANY MORE to all the shit you need to do later? THINK, MCFLY. Go into food prep with a clean kitchen or you will deeply resent the extra half-hour.

I went through St. Vincent’s new album twice while I was prepping. It’s so good. But when you hear the second track, “Pills,” come on for the third time, I’m not gonna lie, pills start to sound pretty fucking appealing. 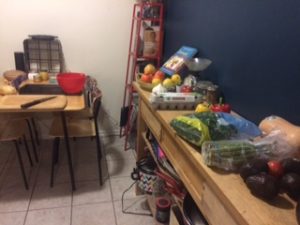 I did basically all my prep for the next handful of days. Hard-boiled eggs, sauteed kale, roasted potatoes, chopped salad fixings, made guacamole, chopped other veggies I need for dinner. But I’m done, it’s cool, I did all of my– 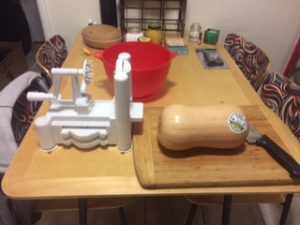 So I call a dinner break. When you’re both the foreman and the labor, you get to do that shit.

I had one of my favorite dinners: a Trader Joe’s impulse-buy heat ‘n eat item + wine. (Oh god, I’m not going to get to have wine after hours of food prep next time. Oh god.) I sought out the opposite of what I could eat for the next 30 days — pasta stuffed with cheese, smothered in a mystery sauce, with no meat or eggs in sight. And wine, full of alcohol and sulfites. I don’t have a strong rebellious streak, but food does bring it out in me. Speaking of which brings me to my second trap…

Food-Prep Trap #2: “I’m not hungry for dinner yet, so I’ll just wait until after my food prep–” FUCK NO DON’T DO THIS. Because then you’ll have to stop before you’re done, inevitably. And you’ll sit, and you’ll eat your dinner, and you’ll get a good half hour into an episode of Westworld and writing your dumb blog, then remember UGH, that butternut squash is still sitting there, isn’t it?

You know what. Fuck that squash. I’ll cut it up tomorrow right before I cook it.