I’m not sure if it’s psychosomatic or just that I didn’t get enough sleep last night, but it’s 8:30pm and I’m wiped. It’s day 1, not really long enough to get anything out of my system. But I tell you, I felt low-energy by about 6:00. Considering I’m doing this for sugar reasons, a) it’s not that surprising, and b) the next couple days may suck.

Anyhow, due to my dutiful prep and fastidious pre-planning, today’s meals were splendid. Due to my misjudgment of time yesterday, I still had to break down a big ass butternut squash when I got home. Took about 25 minutes of work: 10 minutes to break it down, peel it, and scoop the seeds; 10 minutes to spiralize the big awkward piece (which took longer and more effort than usual, since I was working on my janky kitchen table); 5 minutes to slice the bulb. It’s a testament to how much I love butternut squash, that I’m willing to deal with that crap on a weekday.

Enough of that though… 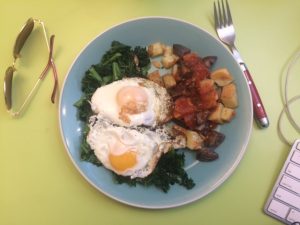 A huge amount of kale, sauteed down to an unimposing pile of kale in coconut oil and garlic; roasted potatoes with salsa; 2 eggs, sunny side up, cooked in avocado oil. Not too shabby. 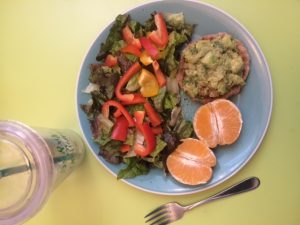 This was freaking delicious. I also waited way too long to have lunch today, since I was busy with work stuff, then had to run an errand at the beginning of my lunch break. I basically inhaled this.

HOT TAKE: Eating salad off a plate is bullshit. I NEED EDGES. Chopped up lettuce wants to go everywhere but on that plate. Trying to toss greens in a dressing on a plate? Disastrous. Trying to stab/scoop it with a fork from a plate? Fork that. I did this today for the plate mapping, but in the future, it’s bowl city for me, baby.

Now, one of the reasons this plan is hard for me is that at my day job, a large part of what I do is look at pictures of delicious food, write about delicious food, and exist directly adjacent to where delicious food is being cooked in my office. Today, there was a shoot going on featuring fun Super Bowl snacks. I sat at my desk working like a chump while my coworkers went to snack on the goodies. Not that I wanted any. (OF COURSE I DID, they had little shot glasses of some chocolate mousse looking item, and I am not made of stone. I’m made mostly of yogurt, Thai takeout, fear, beer, hugs, tacos, self-doubt, and candy that I keep in a drawer under my TV.)

At 3pm, I began to get cranky. Because that is the time when my body — not my stomach — starts craving something sweet. So around 4pm was the perfect time to defend my life decisions to a friend I haven’t seen for roughly 15 years. (It was not.)

Once I got through that, I was real-people hungry. 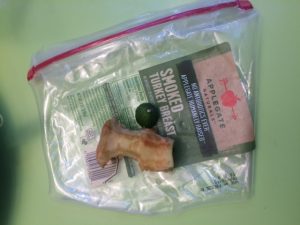 Was too hungry to think to photograph beforehand. Had a couple slices of turkey, a small apple, a small cucumber, and a few walnut halves. Felt much better. I actually had the walnuts a while after the rest, because I was still hungry. And lest you be like “was that just craving snacking?”, know that these were not particularly cravable walnuts. They’re a bit old and unsalted; they taste like basically nothing except musty nut meat. THAT’S RIGHT, I said “musty nut meat,” which is a horrible phrase that I stand by completely. 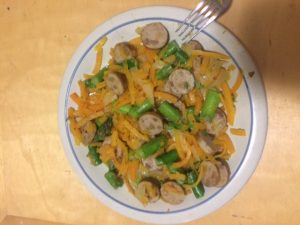 Not as pretty as I would have liked, and the lighting sucks in my kitchen, but: spiralized butternut squash, onion, asparagus, apple chicken sausage, garlic, and ghee. Got the cook on the squash a bit uneven, but hey, c’est la ghee.

(Ah crap, my jokes are gonna get really bad this month, aren’t they.)

Tomorrow, I encounter another challenge: my generous boss is buying lunch for the office. However, since we’re not the kind of office that orders in from, like, TGI Fridays, I’m fine. Salad with chicken and avocado, tons of veggies, and I’ll dress it with ACV and olive oil, as per usual.

OH! And with all my talking about Whole30 ahead of time, one of my coworkers has decided to do it too, starting on Monday. But she’s on a keto diet most of the time and is, no joke, a triathlete, so uh, yeah, she’ll be fine.

And on that note, I’m going to go do my dishes. [Note: This is a lie. I’m going to leave them until tomorrow morning, because that’s one of the perks of living alone.]