MY OFFICE IS FULL OF GODDAMN ICE CREAM AND THE UNIVERSE IS CRUEL.

As of 9am, I felt pretty good today.
“Is that wrong?” I wondered.
“Has it just not kicked in yet?
Shouldn’t I be feeling shitty?”

(Isn’t it ridiculous that we go into healthy endeavors EXPECTING to feel bad at first, like we have to do penance for our previous garbage lifestyle before we can start feeling good or else we haven’t earned it?)

I didn’t have the hangover feeling that the timeline thingy said I’d probably have. What I did have? It was panic. Like, wired panic, chest-bursting, nervous panic. “Uh, that sounds like it’s probably just your anxiety?” YEAH BUT IS IT.

A friend posted a link from a woman who claims Whole30 made her lactose intolerant.

Now, here’s the thing: I’ve wanted to seriously scale back the amount of cow’s-milk dairy in my diet for a while now. Environmentally, industrial cow farms suck balls, and I know that. I’ve got less issue with goat dairy because I suspect there aren’t so many industrial goat farm lots around. I guess I haven’t really researched it that much though.

So I go down a research K-hole, discovering stuff like how lactose tolerance is kind of a “if you don’t use it, you lose it” thing, and also how the human body naturally produces the enzymes (like lactase) needed to process lactose BUT frequently produces less as people get older. AND if you aren’t eating anything with lactose in it, your stomach goes “Well, I’m not going to keep making these if you’re not going to use them!” (Imagine your stomach is your mom who keeps knitting you mittens even though you’re all like “MOM, I don’t even wear mittens, it’s like you don’t even know me, get out of my room!”) So it stops making lactase. And usually, if you change your mind and are like “actually, I could really use some lactase because I’m gonna start eating dairy again,” your body is usually like, “oh honey, sure just give me a week to remember how to make lactase again, and you’ll be all set.” BUT! Sometimes your stomach says “NO. I love you, but  eating dairy wasn’t good for you in the first place, and I was just protecting you before, but you know what? I’m done. No more lactase.”

(Jesus Christ, are you still reading? You are amazing and thank you for taking that journey with me.)

So yeah, I’d like to get cow’s milk dairy mostly out of my life.

But I’d also like to be able to eat the occasional ice cream cone without shitting my pants.

That’s when the tornado of worry ramps up.

What if this is all a big mistake?
I don’t really know what I’m doing.
I’m trusting what I read on the Internet.
THE INTERNET.
Do you know the kind of dumb shit people say on the Internet?
There are Flat Earth Facebook groups on the Internet!
What if the people I’m listening to don’t know what they’re doing?
Maybe I should trust my instincts, eat what I know is good for me.
Who are these people? How can I trust them?
What if I ruin the way my body works just by trying to do something healthy?
Is it really?
HOLY CRAP.

So I went to bed.
(Again, this was all last night. Oh sure, I slept like a baby.)

But back to today…

This morning I felt wired, exhilerated. Well, not first thing this morning. When my alarm went off at 5:30, I was like “LOL NO SNOOZE BUTTON.” But then I got my ass up and went to the gym for the first time this year — good for you, Dana. In the interest of pre-workout food (which I skipped yesterday, oops), I made myself eat a hard boiled egg.

[Just picture a hard boiled egg here. You know what an egg looks like. It looks like an egg. With a little brown mustard on it; Trader Joe Deli Style Spicy Brown.] 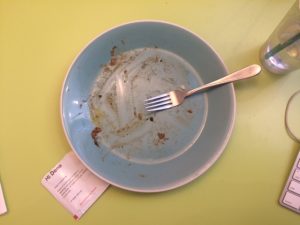 Soooo, I was hungry, my food smelled delicious, and I ate it before snapping a pic. Blogfail. It was basically what I ate yesterday BUT I cooked it all together in the pan instead of separately and HOT DAMN, was that the ticket. I’ll take a pic when I make it again tomorrow. 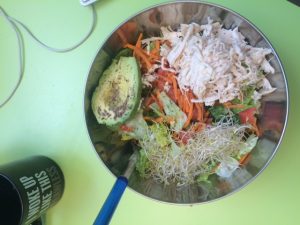 Veggie Salad from California Chicken Cafe + chicken breast, sans croutons, splash of ACV added. Y’all, this is maybe 3/5 of the entire salad — that thing was MASSIVE. I saved the rest for a snack (then left the damn thing at work over the weekend). 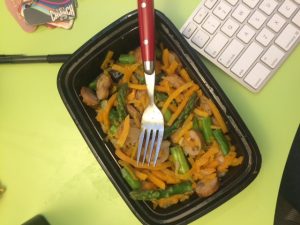 The other half of what I cooked last night! Still delicious. Eaten at my desk before I headed over to sell tickets at the theater. (#actorslife)

By the time the show was up and running, it was about 8:30, and I was real-people hungry. So I came home and had a snack!

OK, it’s a little blurry, but tasted amazing. Half a can of tuna mixed with Primal mayo, a few mini bell peppers, with some of that chunky veggie-loaded guac. Perfect.

NEXT CHALLENGE: Whole30 meets day-long sketch comedy rehearsals + house managing a theatre at night. I’ll probably be able to go home between, but also I might not. Hmmm. You know what? No problem. I’ll eat my breakfast before I head out, pack my lunch and dinner to go, and make sure I have a snack on hand as well. The hard part: The group may end up ordering pizza or Chinese food, and I’ll be sitting there like a bozo with my salad. Sigh.

Man, I haven’t had to do one of these day-long packing jobs in a while, but I know I can do it, and do it I shall. I just unearthed a bunch of ice packs in my freezer when I threw out a slew of freezer-burned half-eaten bags of broccoli and haphazard frozen egg patties I made on a prep kick years ago.

Fun fact: If you overcook eggs, they don’t get more appealing after a stint in the freezer. Who would have guessed (other than, you know, everybody)?