Yesterday, I hit a wall.

Today, I woke up, and the wall was laying on top of me.

I got a decent amount of sleep last night — granted, I stayed up too late trying to get that damn sausage video to upload and then when I woke up at 1am and saw that it had finally finished, I uploaded my post before I went back to bed. But I still got plenty of sleep. Then the sun started creeping into my room, and the birds started chirping, and I was like “Damn, I need to fudge the timestamp on yesterday’s post so it says February 3rd,” so I was up.

BUT I WAS NOT HAPPY.

I brewed up a pot of tea, and cooked my breakfast. Now so far, more than I miss sugar, alcohol, or dry carbs,  I miss dairy. And not cheese, like you would guess. I miss yogurt. I really should have guessed. It’s a stone-cold staple of my diet. I’ve eaten yogurt almost every day for the last 4 years. But while I miss my usual bowls of plain yogurt, chopped apple, almond butter, and cinnamon so much I could cry thinking about the taste (YES, I love it that much), I still can’t be mad when I get potatoes for breakfast… 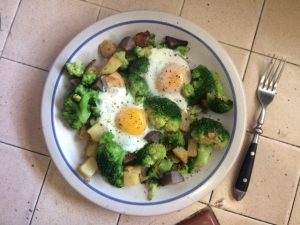 Variation on the usual, featuring broccoli (previously frozen) along with the last of my cooked potatoes. Not as good as with the kale, but still good. Plus, a mug of green tea.

Got my shit together, poured the rest of my tea into a to-go mug, and got out the door to rehearsal. Driving down Lankershim, I reflexively stopped breathing through my nose as I passed In-N-Out, in the way that you would as you drive past that brewing plant just off the freeway, or that cow farm that reeks of manure about 30 seconds before you see it.

Upon arriving, I saw one of my castmates brandishing a large Dunkin Donuts box. I gritted my teeth and basically blocked it out in my brain. It was like in Westworld, when the hosts get shown a picture from the outside world.

It was then I realized that if I was going to be funny, energetic, and (at bare minimum) pleasant for this long sketch comedy rehearsal, that friggin’ tea was not gonna cut it. So I head up to Starbucks.

On my way there, I pass a popular brunch spot, advertising French toast and bottomless mimosas. It took all of my couth not to flip off the brunchers as I walked by.

The Arby’s next door was empty, though, so I had no such reservations. 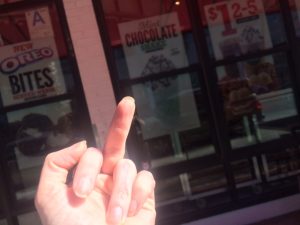 Now, I looked online to see what drinks at Starbucks were Whole30 compliant, knowing that they have both almond milk and coconut milk options. And the article I found cheerfully listed off every obvious plain coffee or tea item on the menu.

I don’t even generally like stuff in my coffee, usually just when I’m cranky, but *gestures around* Neither the almond milk nor coconut milk are compliant? OH MY GOD KISS MY ASS.

Like I said, this was before I got my coffee. Snagged a plain iced cold brew, then headed on my way. 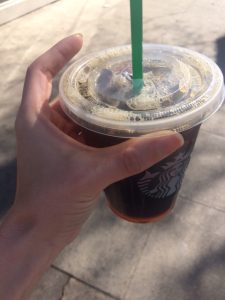 (I don’t know why I took this picture — as if you don’t know what iced coffee, sidewalks, or hands look like.) 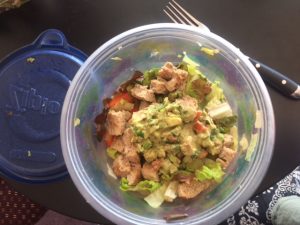 Same salad as yesterday. I bothered to take a new picture of it for today, but didn’t bother enough to make sure it wasn’t blurry.

This is all going down on Super Bowl Sunday, btw. I’m not salty about being in rehearsal this afternoon, because I have no desire to be at a Super Bowl party right now. With the levels of listless rage resting in my body today, no good would have come of it all.

Instead, post-rehearsal, I hit the grocery store, which looked like it had been ransacked by a community prepping for a natural disaster. At least it was uncommonly calm for a Sunday. I broke down and bought Hazelnut Nutpods to try to get me through “Kill All the Things” and “I Just Want a Nap.”

Upon returning home, I put on the game (because who was I kidding), poured some Strawberry Perrier into a wine glass (I AM THE QUEEN OF FRANCE), and started cooking the dinner I’d plotted… 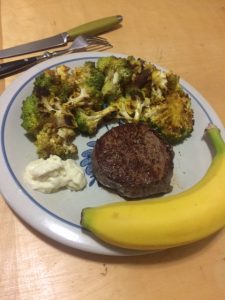 It ain’t pretty but OOOOH was this tasty. You see, I’d roasted up some romanesco (the stuff that looks like cauliflower and broccoli dropped acid and had a fractal baby) with coconut oil, curry powder, and sea salt this morning (while I was watching Westworld; I’m almost to the end of season 1, you guys). So I reheated that and cooked up a bison filet. WHICH WAS GODDAMN DELICIOUS, and I also got the cook on it damn near perfect. Scroll quickly, vegetarians… 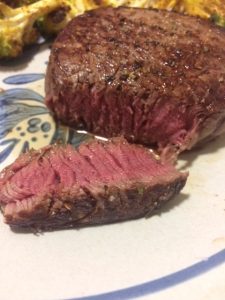 And I paired the roasted romanesco with a bit of Primal mayo, since I scored a free jar of the stuff from work. Crazy good. Then I treated myself to a banana, since I forgot to eat fruit with my lunch.

Tomorrow, Donnelle officially begins her Whole30 endeavor, and I head into another post-work food-prep evening.

Time to do the dishes.