This one gets a bit rambly, so I’ll keep the top short. 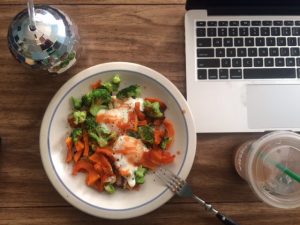 Was out of potato, so today was broccoli and butternut squash (previously roasted) cooked up in the pan with my eggs. Was it freaking delicious? YOU BETTER BELIEVE IT WAS.

I feel like I’ve been making some things harder for myself because I’ve started ordering from Imperfect Produce. Which is great, but it means I get most of my fresh produce late Tuesday night. Which is inconvenient timing for meal planning, but I’m all like “NO, they’re a good company and this is making me be creative and try different stuff!”… but it’s also kinda stressing me out more. I may put it on hold starting next week, because not being able to food prep on Sunday is ROUGH. But right now, I’m trying to ride the line between using up the last of last week’s veg, getting a bit of new stuff for now, and waiting on my box o’ produce to arrive. 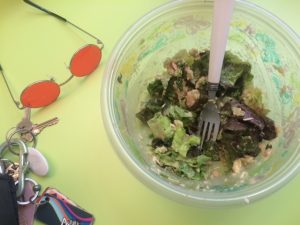 Guac salad with a can of tuna. Wasn’t in the mood for a turkey burger.
Oh, and an apple with cinnamon. 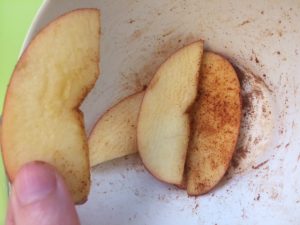 It’s 3:45pm. I’m proofreading a story about ice cream; it’s torture. Someone is cooking something that smells amazing over in the kitchen.

Since I was straight up hungry, I had a snack. Not pictured, but I had some deli turkey, olives, and a few unsweetened unsulfered dried apricots. It shut up my stomach but sure as hell didn’t make me feel full. But now I’m feeling all guilty, because I looked at the package for the turkey (natural stuff which I bought pre-round) afterward and saw that the damn stuff has a tiny bit of carrageenan in it. Dammit. AND even though I saw plenty of places online saying “dried fruit is OK as long as it’s in moderation,” now I’m seeing stuff saying “like, it’s OK… but it’s not really OK, and it’s also not OK in a snack.”

Because if there’s anything I hate (aside from the obvious genocide, racism, sexism, artificial banana flavoring, etc.), it’s learning that I’ve done something wrong after the fact. When it’s too late to fix.

“That’s not true! I exist, I care, and I resent the fact that you’re not playing by the rules!”
Do you really?
“Yup. Because at the end, you’re gonna be like ‘I did this thing, I have this sense of accomplishment’ when you didn’t earn it, you didn’t deserve it, you cheated, and so you shouldn’t feel good about any of it since you didn’t really do it right.”
… You motherfucker, you’re not a person reading my blog, you’re the A-hole voice in my head!

Aaaaand there we have it. If I started over, I wouldn’t be doing it for myself or my own health. I wouldn’t even be doing it to preserve my cred with my Whole30-devotee friends or anyone else who reads this blog (though that would still play a larger part in it than I’d like to admit)…

I’d be doing it because the mean little voice in my head told me that if I didn’t do it perfectly or as perfectly as I could, then I’m a fraud and a failure.

I’d be letting the mental terrorists win.
So I’m not gonna do that.

Let’s be real. I don’t have any gastrointestinal distress that I’m trying to get to the bottom of in this round. I understand that carrageenan is linked to inflammation, but I’m pretty sure that teeny bit of carrageenan I had in those 3 slices of deli turkey aren’t going to derail all the beneficial stuff I’ve been doing for my body. And I’m fairly certain that having eaten the apricots as part of my snack (when I was legit hungry and really needed it) as opposed to with my meal isn’t going to make a grand difference.

I’m gonna forgive myself this.
But I’ll probably also give the rest of the turkey to someone in my office.

I’ve had this article sitting as one of the myriad open tabs on my work computer for about a week, and I think I’ll leave it a bit longer, because I need it. If you’re all TL;DR, the gist of the piece is this:

Maybe your real work right now is to realize that you work hard enough.

(This is probably a good time to also admit I popped a tiny sugar-free breath mint on Saturday before it occurred to me that I shouldn’t.)

And then, my ugly but tasty dinner… 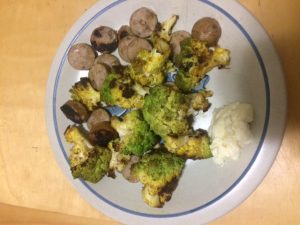 Woof. The rest of my roasted romanesco, the last of my chicken sausages, and some mayo. I also added some mustard for my sausage after this pic, which would not shoot in focus for anything. My camera was like, “Nope, too ugly, not looking directly at it.”

Gonna leave you with one more thing that struck me this afternoon. I suggest you watch this video of Nick Foles after he led the Philadelphia Eagles to a Super Bowl victory yesterday, but even if you don’t, here’s this:

“If something’s going on in your life and you’re struggling, embrace it, because you’re growing.” — Super Bowl MVP Nick Foles

P.S. GODDAMMIT, I just discovered those frozen cubes of garlic that I love have goddamn canola oil in them! Sonofabitch!