Actually had a post-workout mini meal today! Yes, I know, I’m supposed to eat pre-workout too, but you know what? I think the fact that I can/will get up at 6:00 (or earlier) to get my sweat on is magical and responsible and laudable and basically get off my back. I have no desire to eat anything at 6am. That’s too early for even MY appetite. Any time I exercise in the morning it basically goes like this.

Dana groggily flops down her exercise mat and cues up the day’s workout video. Once she finally gets her terrible internet to play the thing, she begins gamely following along. After warming up, just as the real workout is about to begin, she pauses.

Goddammit, I was supposed to
eat something before I started this.

She sighs, looks at the video, and resumes her workout.

I can basically never get my shit together enough to eat before a morning workout. However, I can still eat after my workout, and so I did. I snarfed down some reheated roasted butternut squash (somehow still glorious) and a hard-boiled egg with mustard. Not pictured because I ate it too fast.

I tell you, not only is Whole30 making me really think about what I’m putting into my body, but this additional challenge I’ve given myself of writing daily and photographing my food is making me think more about how I’m presenting my meals to myself. And, obviously, also making myself write daily. I mean, I write daily anyway, for work and in 8 million rambly emails and conversations, but this is making me be real, be honest, and put it out there.

(“Oh my god, Dana, just tell us what you ate and let us get on with our fucking lives.” Fine, fine.) 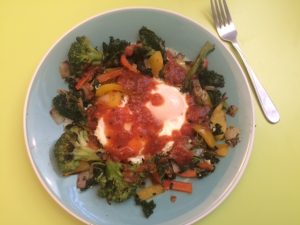 Now considering what a freaking hodgepodge this meal was, plus knowing that the eggs stuck to the pan, the fact that this looks as good as it does is a ding-dang miracle. I’m trying to get better about plating with purpose. And I swear, this looked better in person. Rando-veg + eggs + salsa. *flourish*

I’ll try not to be TMI about this, but ever since I had red meat the other night, my digestion has been sluggish AF. I don’t eat red meat a lot, maybe a couple/few times a month. Generally, my digestive system runs like a well-oiled machine (ew), and it especially had in the 4 days prior to my bison steak on Sunday night. And it’s not that it’s fully gone on strike (ew), but rather than working like a highly efficient production line, it’s as if there’s one employee who showed up because everyone else has the red-meat flu but, doggone it, he’s trying to keep the place running himself somehow, god love him. Sigh. Maybe I should give even more consideration to ix-naying the red meat. 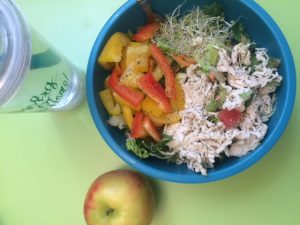 This was the remains of my salad from Friday + the rest of my bell pepper. AND IT LOOKS PRETTY DAMN NICE! OK, I hid the brown lettuce bits…

I swear, every day, I can feel the 3:00 hour. Nothing intense; it’s just a nagging sugar craving. I start feeling the pull, and I look at the clock — every time, it’s within the 3:00 hour.

I just read the words “apple pie.” My heart skipped a beat; my stomach did a double take; my taste buds ached.

It’s cool though. I had an apple with cinnamon with my lunch, so that’s basically the same.
(All seriousness though, I fucking love apples and cinnamon. Lots of cinnamon. Irresponsible cinnamon levels.)

Skipping an afternoon snack because I’m having my dinner super early, since I’m heading straight to rehearsal after work and ughhhhh. 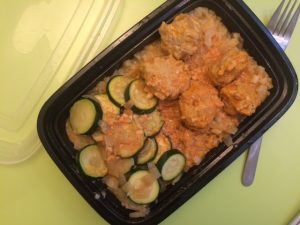 Behold, chicken meatballs in a coconut milk red curry, with zucchini and onion, over a bed of cauliflower rice.

OK you guys, I’m super impressed with myself. Because I didn’t just make myself this professionally-packed-looking meal… 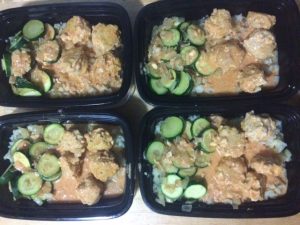 I made 4 of ’em! Yup, last night I made 4 pre-packed dinners, since I’ll be on the go most nights this week, and I even made them cohesive dinners that are the kind of thing a person might eat even if they weren’t depriving themselves of dairy, sugar, joy, etc. But I will admit that I did not use a recipe; really just kinda winged it. Didn’t even measure things out. And you know what? My experimental measurements-be-damned improv curry is pretty decent! The veggies are cooked and seasoned nicely, the meatballs are lovely,… 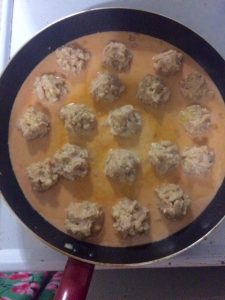 (Look at them balls simmer!)

OK, the curry sauce IS lacking a bit. By the time I got to making the actual sauce, I was like “UGHHH IT’S FINE, I’M SURE. Just let me be done cooking.” It needs some extra salt, heat, and acid; luckily, those are basically the flavor components of my favorite compliant hot sauces, so BAZINGA.

Good thing: I am so full. Bad thing: Oh man, I hope I’m not super farty later. (“…CAULIFLOWER.” That one’s for Donnelle and the Bill & Joan cast.)

UPDATE: I was NOT super farty later. BEHOLD MY VICTORIOUS LACK OF FLATULENCE!