I’m a week deep into this bitch, and I think I’m doing pretty freaking well.

That said…
It appears to be bread craving day.

I saw a sign reading “Jesus Pan de Vida” on my way back from the gym, and had a Homer Simpson moment. “Mmmmm… pan de vida…”

Will you just take a minute to ponder the everloving majestic foodscience of A CROISSANT? The craftsmanship. The layers. The creativity it took for someone to come up with that in the first place. Good pastry cooks are basically wizards. And the taste? Hoooo, I can barely stand to contemplate the taste of even a crappy croissant right now, much less a well-crafted and freshly baked specimen.

But enough about carbs.

So, I’m hopeless with my pre/post workout meal situations. This morning, I was like “Don’t forget to eat an egg before you go to the gym!” after which I promptly walked straight out the door. As I drove home, I was like, “OK, we’ve got a few minutes, so grab some food and ice your knee.” I grabbed an ice pack, sat down, shuffled off to the shower and was like “I’M SO HUNGRY WHYYYYYYYYYYYYYYY oh right.”

Man, I need better lighting in my kitchen. Every pic I take in there is straight up disappointing (see: most of my dinner photos). (I’m also on the verge of getting a new phone, and that will have a better camera, so that’ll be good too.) The light in there just kinda generally sucks. And while part of me is SO resistant to pulling out my actual lighting kit in order to photograph MY FOOD… it would look a lot better. We’ll see. 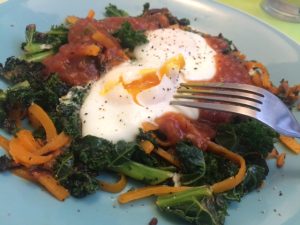 The usual suspects, this time with the last of my spiralized butternut squash and kale. Slightly overcooked the eggs, but they’re still a bit soft and yummy.

It was a 2-coffee morning, but not because I was feeling sluggish and low-energy — I was just flat-out tired because I slept crappy last night. My sleep habits have been pretty shit for a good long time; I’ve gotten better, but still not great. Maybe that’ll be my next wellness task to tackle… 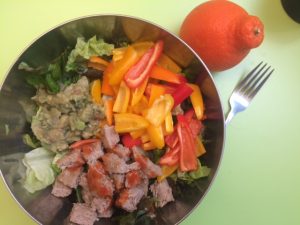 The guac is a bit less verdant than it was but yummy nonetheless. Back to the turkey burger and damn, after a couple days off ’em, I’m glad to be back. I don’t see myself making my own turkey burgers from scratch when the ones from Trader Joe’s are this good and I’m just gonna chop ’em up and put them on salads anyway.

This is a lead in to something I’m gonna post on at more length over the weekend most likely, but it bears saying now — if you’re doing something like this and making a really strong effort to eat cleaner foods and take more care with what you put in your body and are cooking lots of meals at home… Don’t be a hero and force yourself to make everything from scratch and/or chop every damn thing yourself. Sure, you might get a bit of sick pride from doing all the work yourself, but it’s not sustainable and not worth it. You shouldn’t feel like a martyr to your healthy lifestyle. Find your best shortcuts. I’ve got a bunch of products that I’m leaning on for support this month because, as much as I’d love to, I can’t make make a whole elaborate dish for every meal of my day completely on my own. Some meals need to be easy. Why? So you make them and eat subsequently them. They should also taste good. Why? So you want to keep eating them rather than going back to eating food that is terrible for you but has actual flavor. Having lofty goals is a terrific thing, but the thing about going aloft is that you’ve gotta come back down a bit after you reach them. Find helpful tricks and products that can help sustain you at a reasonable level, whether that’s pre-chopped cauliflower rice, ready-to-eat hard-boiled eggs, or a jar of chopped garlic that doesn’t taste nearly as good as the fresh stuff but sure tastes better than none at all.

More on that another day.

Back to this afternoon. Had a Blueberry Rx Bar because I am real-people hungry, well hydrated, and it will be over 3 hours til my next meal. And I didn’t eat my pre/post workout meals. DAMMIT, I really need to get those in. I don’t like relying on dried-fruit snacks, and though the Rx Bars have protein and other stuff for balance, I know I can do better and that I’m having to compensate later in the day for not eating what I should early in the morning. Starting tomorrow, it’s on.

I remembered I had 2 bags of Trader Joe’s Black Forest Cupcake Tea left in my at-work tea stash (which is formidable, FYI). It’s not at all sweet, but there are cacao shells and fruity flavors in the stuff, and it’s just wonderful. Had a mug of that which made me happy.

And for dinner — since I’m gonna be eating on the go the next 3 dinners — I decided to cook up something special at home. And for me, that frequently means salmon. 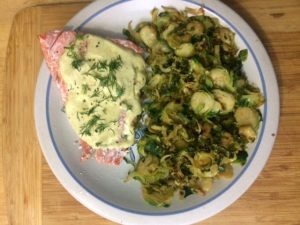 Now, I’m bummed that I messed up the heat situation and cooked the salmon a bit more unevenly than I’ve recently learned to do. (Just follow the lead of the master.) But I mixed up a quick mayo-mustard sauce, and topped it all with some dill, and it tasted just fine alongside some sliced and sauteed Brussels sprouts, into which I through a bunch of different seasonings and flavorings. The overall effect was quite tasty and just what I needed as I watched the season 2 finale of This Is Us. Because SERIOUSLY, no one should have to watch that show without some sort of comfort nearby. I had to watch Sunday’s episode with nothing to console me but a strawberry Perrier. INSUFFICIENT COMFORT FUNDS. COLD BUBBLY BULLSHIT.

(Not you, Strawberrier, you’re lovely.)

“Gee Dana, the light looks a lot better in your kitchen today.” OK, fine, I broke down and set up one of my studio lamps. That’s right. I’m that person now. But at least the photos will be prettier, so long as I’m not taking a picture of, say, a large pile of sauteed Brussels sprouts.

Now it’s night, and I’m tired. I’m baking up some Russet and sweet potatoes for morning starchy veggie items post-workout. I will figure this balance out, mark my words.

Maybe one more Strawberrier before bed…