You know those days where you open your eyes at 6am, bound out of bed, and declare, “Boy, I could really go for a hard-boiled egg right now!”

Yeah, me freaking neither.
But I did it, y’all.

True to my word,  I got up, ate that dumb egg, and then did my workout. And then afterward, I had a chunk of roasted sweet potato (with Frank’s RedHot) and a hard-boiled egg white (I need another protein I can eat in the mornings). Pre and post workout mini meals accomplished.

This meant that I was not only NOT starving by the time I got to work, but I could take my time and wait until I was hungry to have my breakfast; that ended up being around 10:30.

True story: I walked into work today, and my coworker Gina greets me with, “Hey, how’s your Whole?”, which sounds way worse and way funnier out loud. (Say it now. Say it.) Smash cut to me laying on the kitchen floor laughing for about a minute.

I had another night of crappy sleep. Brain was spinning all night trying to organize shit. It’s like the equivalent of server dreams, when you’re trying to remember orders that don’t exist; or actor dreams, when your brain is spitting out fake lines to the play you’ve been trying to memorize, convincing you that this is really important work you’re doing and that you’re actually multitasking sleep and work. That’s right — my dumb half-conscious brain thinks it’s found a loophole ON SLEEP.

“Dana, maybe you should try to get back to meditation or maybe research sleep habi–” YES, MAYBE I SHOULD BUT RIGHT NOW THAT SOUNDS LIKE A MARCH PROBLEM. 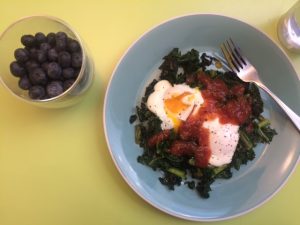 Alright, so since I’m now eating the prescribed carby veggie immediately post-workout, I don’t really wanna double down on ’em again right at breakfast. Meaning Meal #1 today was eggs, salsa, a pile of that sauteed kale, plus a side of blueberries. (I’m not complaining; it was all great.) “Are you really still showing us pictures of this breakfast you have every fucking day?” YES, because this is my blog and also I’m getting better at it so nyeh.

You’re also getting the full effect of how I basically eat most of my meals at my desk at work. Sad Desk Lunch, meet Sad Desk Breakfast and Sad Desk Dinner. 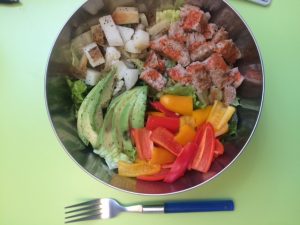 YEAH, but this time, it’s got fresh sliced avocado (because I’m out of the other guacamole ingredients) and roasted potato (which frankly would have been better with the kale & eggs, but this was still pretty good).

Now, with my schedule skewed a bit, I had eaten my lunch at about 2, meaning that by the time 3:00pm came around, I was nothing close to hungry…

AND STILL that weird nagging spot in my sugar-junkie brain was sidling up, like “hey man, I just need something to get me through the hour.” Sigh. I had a coffee and I was fine.

This is madness. I’m not showing this meal again, because you’ve already technically seen it when I made the 4-meal batch. I had one of those. You know what it looks like. It wasn’t pretty then, and it wasn’t pretty today either. I threw a bunch of Trader Joe’s delightful Yuzu Hot Sauce on it, but it was still a bit low key for my liking. Hmmm…

At rehearsal, they were running a sketch with a celery gag in it, where someone mentions dipping celery in peanut butter. And I’m sitting there going “Holy shit, am I really fantasizing about eating celery and peanut butter right now??” Indeed I was.

On the drive home, I was thinking about candy. Chocolate bars. Specifically, a recent evening where a friend of mine and I had gone out to dinner. Hit the Tuesday night $1 oysters and tacos hard. On the walk back to her place, she apologized and asked if I minded making a stop at 7-Eleven for cigarettes. I replied that I did not mind, relieved for an excuse to indulge my own vice. Scanning the candy racks, I struck paydirt: Milky Way Midnight. One of the great mainstream chocolate bars on the market, and a vast upgrade from a standard Milky Way. We strolled back down the street, she with her smoke, me chomping away on waxy dark chocolate, near-liquid caramel, and a soft vanilla nougat. Maybe this is the reason I never took up smoking; because I’d always rather be eating.

Since I ate my damn dinner at 5:00, I was hungry by 9:00 when I got home, so I had an apple (with irresponsible levels of cinnamon) and a Chomps snack stick (think Slim Jim’s hearty and wholesome cousin).

I just suddenly got very cranky. I’m going to bed.