I’m not sure how today got away from me, but here we are, 10pm, dazed, confused, exhausted, but all my dishes are done.

This morning I was having a hard time getting going, with a bad case of Analysis Paralysis. Example: I decided days ago that I was going to go ahead and get the Whole30 Fast & Easy cookbook. I get myself to Target before rehearsal, find the book, flip through it and go “But do I really NEEEEED it? Can’t I come up with this stuff on my own? Forget it.” WOMAN, we already established that you need this book for when you CAN’T come up with anything! I ended up going back for the book a few hours later. Sigh.

Anyhow, today was a lot of eating leftovers, planning next week’s food, cleaning, and getting some cooking done for the week. 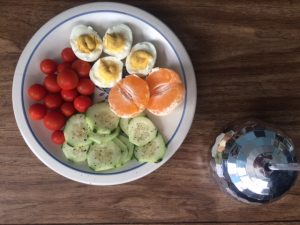 Alright, I hit my limit on the hot-veggie, sunny-egg breakfast combo, mostly because I knew my veggie option for today was what I had yesterday… and I hated it. Fuck that. So I raided the fridge and scrounged up some hard-boiled eggs, sliced cucumber, cherry tomatoes, and an orange. AND THIS BREAKFAST MADE ME REALLY HAPPY.

So I’m leaning into this format for next week. Hard-boiled eggs, some fruit (I got a big thing of kiwis, which I’m stoked about), cherry tomatoes, cucumber and… baba ganoush! YES, I got it into my head that I would make baba ganoush since I can’t have hummus, but it’s totally compliant! YUM.

… was my final curry-meatball thing. Don’t pair ground meat and coconut-milk sauce and sauteed zucchini and cauliflower rice, because the textures are all very soft, and when you lose chewy carby textures, finding texture variety becomes VERY IMPORTANT. While eating that dish, I started to wonder if my teeth would just go “Clearly I’m not needed here!” and fall out of my head.

I got the dang cookbook, and I planned out my food for the week. HUZZAH! Hit the grocery store, then swung home for a quick dinner… 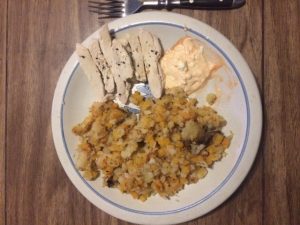 Ugly veggies and chicken! OK, this looks like bland ass, but it was actually pretty tasty. I needed to cook the bejeezus out of my leftover butternut squash and cauliflower rice to get them to a less watery texture, but eventually they got there. Pan-fried ’em with some potato, garlic, and ghee. And the chicken is just Trader Joe’s Just Chicken (a crucial shortcut product — yes, I will make that list eventually) with a hit of Everything Bagel seasoning, with mayo + Frank’s for dipping. SUPER satisfying.

AND THEN THE FOOD PREP BEGAN. I started out with the eggplants for the baba ganoush. Because I’m a sucker for Kenji’s recipes on Serious Eats, I went with his version… but didn’t read it fully before starting.

**PEOPLE, I should know better than this, but I’ll use this as a teachable moment. FFS, always always fully read the recipe before you start it. Twice. **

So, I’ve gotta make some tweaks, but I go with the broiler method. Simple enough.

I get some kale sauteed, and I’m starting up a batch of hard-boiled eggs, when the smoke detector goes off for the first time.

There is zero detectable smoke in my kitchen at this point, and yet, I run over to my sensitive little smoke detector and start fanning the bejeezus out of it with the nearest thing I could find, which was a flannel shirt. It stops. I open a window, turn down the heat. You know what? It broiled long enough and, now that I’m looking at other recipes, I’m fine to just bake it from here on out.

The alarm sounds again.
Resume fanning, and it stops. Hmmm.

A few minutes, and it goes off again GODDAMMIT, and it’s really going. Again, there is still ZERO smoke present in my kitchen.

I get the thing to stop and scramble the window fan back into my kitchen window, after having taken it out for the winter. Both blades on exhaust, let’s do this thing. Handled.

WRONG. Alarm. I grab the lacy sequined fan that Andrew got me when he was working on the drag movie. On a chair, fanning hard.

It’s then that I realize why it’s going off: because somehow, that weird little hallway nook it’s nestled in apparently collects all the hot air (along with any amount of smokitude) from the kitchen, holds it, and has nowhere to pass it. Basically, my tiny hallway needs to fart, and it can’t, so the smoke detector is going off.

I open the other kitchen window. I stand there fanning the fucker for a couple more minutes.

Then I realize my eggs have been boiling for god knows how long. UGH. They’re probably overcooked now, but ah well.

WHY is there not a button on a smoke detector that I can press and be like “stand down, there’s no fire, I’m just cooking”?? A J/K button, an NBD button. Plus, my smoke detector is this very up-to-date, could-have-saved-Jack-Pearson model that also says “Fire.” in a very calm robot voice. “Fire. *BEEP BEEP BEEP!!!!!!!!* Fire. *SCREAMING CLAXON OF BEEPS!* Fire.”

It’s cognitively dissonential (not a word, don’t care), and leaves me trying to reason with the smoke detector.

“Fire.”
No, it’s fine, I just have the broiler on!
“Fire.”
There’s no fire, I promise!
“Fire.”
GODDAMMIT, I know you’re just trying to protect me but I’m just trying to make a delicious and compliant eggplant paste!!!

So anyway. I get my prep just about done for the night, including a very tasty almond butter satay sauce. Speaking of which, this coconut milk is THE SHIT: 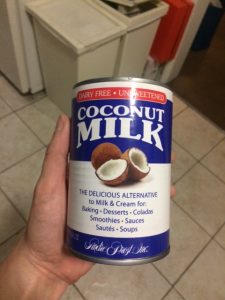 It beat the hell out of the Trader Joe’s variety I got for my curry last week.

But I go to finish my baba ganoush, pull out my tahini… and discover it’s gone bad. There’s the usual layer of oil, but the paste on the top has a crusty layer, and what’s underneath has all the stirrability of concrete that’s been setting for about an hour. After about 15 minutes of wrestling and splashing sesame oil all over my kitchen, I conceded that it would never again be usable.

The baba ganoush can wait until tomorrow when I make the rest of my food for the week.

Going to bed. Fire alarm, we will talk about this in the morning.