Today’s cooking session was significantly less dramatic, but let’s not get ahead of ourselves. (It’s just on my mind because, well, it’s still happening.)

Another day of feeling OK and another day of full-on forgetting to eat anything before my workout. Sigh. Had my post-workout snack though! Sweet potato, half Epic bar. Nothing crazy.

I’ve been in a very good mood and in very good energy today. But if my inbox weren’t being flooded with emails about decadent dinners for two, chocolate, wine, CHEDDAR BAY BISCUIT BOUQUETS, etc., I’d be a lot happier. 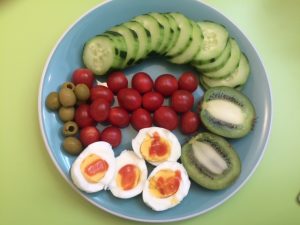 I had a bit of a panic this morning as someone whose wisdom I greatly value mentioned that I was overdoing the fruit with my breakfast plate as such, with tomatoes being a fruit. My first thought was, “DUH, of course, how could I have been so dumb?” But then I remembered that I had thought to research this subject ahead of time and, though tomatoes are technically a fruit, that for the purposes of Whole30, they’re counted as vegetables. And you know what? I’ve cut enough out of my life and am being really good about not relying heavily on technically-compliant stuff like bars and dried fruit; I think I’ll take this one and let myself have tomatoes like veggies, as they still contain less sugar that even the plain yogurt I usually eat every single day. 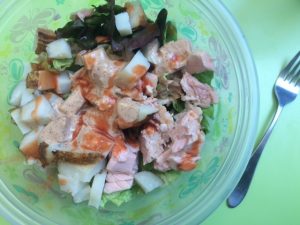 OK, last salad for a while! Had to use up the rest of my lettuce. (BTW, been stashing my cut lettuce in this terrific produce keeper, and it’s a MAJOR win.)

But this is the first meal where I got to use my delightful Almond Butter Satay Sauce from the Whole30 Fast & Easy cookbook. Super yummy, and with a bit of apple cider vinegar, it made one hell of a dressing.

3:00 rolls around, and so does the sugar itch. I have an orange.

I have decided, “Hey, if I need something sweet in the afternoon and I have a piece of fresh damn fruit, I’m not gonna self-flagellate over feeding my sugar demon, especially when I’m not eating a ton of fruit AND I’m eating way fewer sweets than usual overall. The fact that I get itchy for candy then have a fucking orange and then am still itchy for candy but I deal with it… that makes me think I’m doing fine.”

A while later the sugar itchies fade, but I’m still legit hungry. I chow down some of that musty nut meat, and all is well. It doesn’t taste good, but it gets the job done. #giggity

Then I get home, and it’s time to COOK!

I’ve decided to make the Roasted Chicken Thighs with Harvest Vegetables and Apples from the cookbook. I’m pumped, I’m ready, I have all the ingredients. 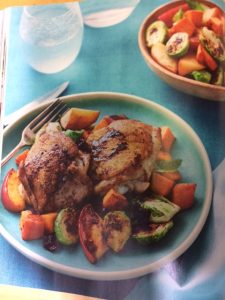 Oh goddammit. No, I am not having a repeat of yesterday’s smoke-detector sitcom. Plus, the reason it wants me to broil the chicken thighs first is to get the skin crispy… but the ingredient list didn’t specify skin on or off. My thighs are skinless (ow), so let’s get straight to the roasting.

I also notice that the ingredient list calls for 2 cups of Brussels sprouts and 1 sweet potato, and that the recipe makes 4 servings. WHAT NOW? I’m not making this + some additional veggie side, homie; I need more veg to fill that plate! (Now would also be a good time to mention that I went with butternut squash instead of sweet potato, since I wanted something a tad less sweet, since the dish also has apples.) So I cook up the amount of veggies I think is adequate.

The whole situation is now taking up 2 baking sheets instead of 1, meaning I need to do some strategic reshuffling of placement every so often. (Also, while this is happening, I make the sauce of reduced balsamic and dried cherries, WHICH IS BALLER.)

Whatever, whatever, it’s done. I plate that shit up…

Not as cute as it is in the book, but what properly roasted veggies are that vibrantly colored anyway? It all tasted great, and I’m stoked to eat this 3 more times.

AND THEN, because I had a bag of carrots sitting around and this recipe Donnelle had sent me burning a hole in my food-brain pocket, I cooked up these bad boys. So easy, so incredibly delicious, make them, make them, make them. It’s a massive credit to my willpower that I did not devour every single one straight from the baking sheet. (I ended up cooking them roughly 12 minutes longer than prescribed, and I recommend it.)