So good that the idea of eating junky junk food doesn’t appeal to me when I really think about it. When I fully think it through and, in the same way I can imagine what it will taste like, I can imagine what I will feel like afterward. Additionally, right before I started my round, I indulged in a few things that sounded amazingly appealing but turned out to be very disappointing, taste-wise. Driving past Burger King this morning, I stopped and looked at the posters advertising the Croissan’wich, which I’ve loved in the past. I brain tasted it, but realistically, not the way I wished it would be. My teeth sunk into the greasy, flattened croissant, bit through the spongy egg layer, ripped through the rubbery bacon, as the waxy cheese coated my mouth.

Fuck, I thought. Have I ruined fast-food breakfast for myself?

Highly doubtful. Fast-food breakfast has a LOT of nostalgic connotation with me, particularly to family road trips and morning bike rides with my dad. But every time I try to recapture that rapturously illicit rush I’d get from grabbing breakfast from McD’s, it disappoints me a little. (Unless I’m hung over. Then there’s never enough. But the terrible feelings I have later can be blamed on my unscrupulous drinking habits.)

Speaking of which, I’m pretty proud of myself that I’ve not been crankier about not being able to drink. Sure, I’ve kinda hermited up against occasions in which I’d have to turn down a drink BUT STILL. I do get bummed walking past the wine section at a grocery store. THAT is what I want more than anything: wine. Not so much the hard alcohols, not beer. WINE. Perhaps because it feels like the most comforting of the alcohols.

Another thing I’ve discovered is that when it comes to indulgences and sweets, I tend to deny myself the good stuff and get a cheapo version of it. And that’s kind of bullshit. I should stop that. In the future, I shall make the treats more special and less frequent, and go for the good stuff. Don’t just grab a candy bar “because why not.” 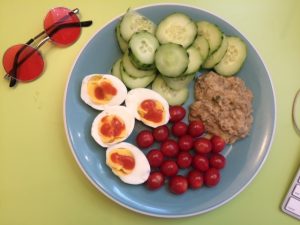 Same breakfast as yesterday, still totally satisfying. I’m lucky to be in an office where having a garlic-pungent breakfast isn’t an issue, because that baba ganoush is intense. But will all the illnesses flying around LA right now, I’m happy to have the extra level of immune system defense. 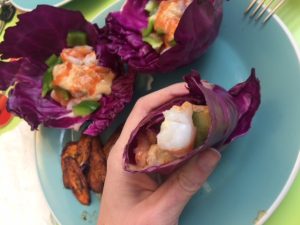 Another angle on the same thing I ate yesterday, this time in action, in case you were like “How is one supposed to eat those cabbage boats?”

But y’all, I had to do BATTLE with the cabbage today. The leaves were all interlocked with each other. It was like the veggie equivalent of one of those brain-teaser puzzles or Operation, and I was FAILING. One leaf got torn unusably — the way it was layered just made no logical sense. But eventually, I got my lunch together.

Around this time, I was contemplating what I was going to do for the evening. Would I get some of the tasks I’d been putting off taken care of? Would I do something dumb like go to the gym?

And then a friend asked me to come have dinner with her and another mutual friend and play games. My knee-jerk reaction was basically “I’d love to, but I’m doing Whole30 right now, so I’m not much fun to eat with.” And she said our friend could make something compliant, no problem… so hell, why not!

What I’m saying is that I don’t have a picture of my dinner for this evening, because I was being a real social human being during my meal, which was delicious. The friend made a veggie soup, bruschetta-style spaghetti squash, some roasted romanesco, some roasted spiralized sweet potato, and berries for dessert. (I ate a Chomps meat stick on the way over to get my protein in.) I probably had more of the veggies and fruit that I should have, but honestly, I could give a shit. Because I sat there and did not whine or anything as my gracious friends ate chocolate while I raided the berries. It was all good, I handled myself well, and shared a meal with other people for the first time this month.

The point is, I’m doing great, my friends are amazing, and tomorrow marks the halfway point on all this craziness.