For those of you worried, no, I haven’t bailed and I’m not dead.

Friday was hard after work, since I had a late performance at a convention, and had a near meltdown due to a combination of stress and low blood sugar. Kind people and an Rx Bar saved the night. Got home at about 2am and LOL NO, I was not doing a blog post then. 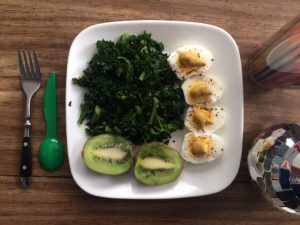 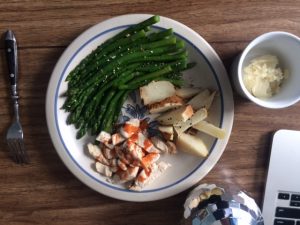 Reconfiguring random cooked items from my fridge and freezer. Hurrah for frozen veggies that I stocked up on — the asparagus was a nice change. My unpictured dinner was the last of my leftover roasted chicken thighs & veggies. 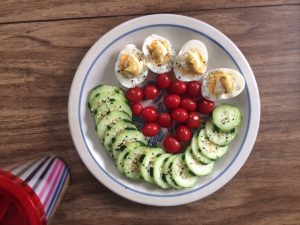 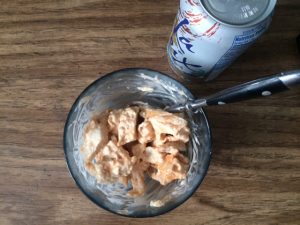 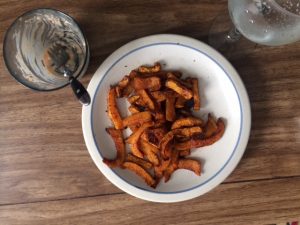 Yesterday, well, I didn’t want to do anything so I didn’t. That breakfast is self-explanatory. By lunch, I was running out of items; mixed up some cold chicken with mayo & Frank’s, then roasted up the rest of my cut butternut squash. (NOTE: I am not sick of eating butternut squash yet… but I am very sick of cutting butternut squash. Bummer.) At some point, I ate 2 kiwis in the afternoon that acid-burned the hell out of my tongue. Kiwis and pineapples are nature’s Sour Patch Kids.

I figure if I can’t eat anything fun to boost my spirits, the very least I can allow myself is to lay on the couch, drink coconut LaCroix, eat the very last of my leftovers, and not do any food prep or writing. 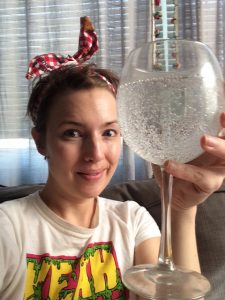 The only time I left the apartment/put on pants was to go see Black Panther (SO GOOD, SO WORTH PANTS), to which I smuggled in my Meal #3: sliced cucumber, an Epic bar, some raw almonds, and a purseful of awareness that this whole thing is ridiculous. (On the way to the theatre, someone said my outfit was fly as hell, which I appreciated, since compliments are really the only decent non-food substitute for Junior Mints.)

I have 12 days left in my Whole30 and, motherfuckers, it’s starting to break my spirit.

I don’t want to go anywhere or do anything, really, because it all reminds me that I can’t have any of the delicious things I see, no matter how relatively healthy they seem, because I can’t trust the ingredients.

Even going to the grocery store is starting to bum me out without being allowed to have wine or ice cream.
I don’t want to have them every day!
Just as a treat!
Just occasionally!
GODDAMMIT.
THIS IS BULLSHIT. 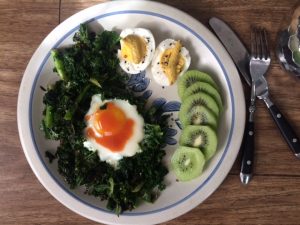 I had 1 uncooked egg left, which went on the last of my garlicky kale, plus the other stuff to round out the meal.

I went out for a walk around the farmers market, thinking “oh hey, nice day, fruits and veggies, chill people, etc.” WRONG. NOPE. Could not handle the crowd; everyone seemed to be either rushing behind me or coming to a dead stop in front of me. And then there were all the non-veggie food vendors. The cheese people. the bread people. MY FAVORITE PEOPLE. Not to mention, the prepared-food vendors. Do I want rice balls? OH HELL YES, I want those rice balls. So after being accosted for donations then getting stuck trying to move through stroller central by Bounce House Hell and the petting zoo, I decided just to walk along Ventura Blvd. Which was fine, until I walked past my favorite ice cream shop, which wasn’t even open at the moment, but still made me extremely sad.

Headed to the mall. (Again, an Rx Bar saved me and my poor sense of time from a meltdown.) Tried to get some stuff done, it didn’t work, but I scored a sweet deal on 50%-off jeans so, hooray. And they fit me spectacularly and that’s rare. Also got a cheap nailpolish and sheet mask, since that’s the junk-food of toiletries. FFS, go home and eat a meal because god knows I can’t just pick something up while I’m out and about even if it does seem healthy. *shakes fist at sky/self who decided to do this* 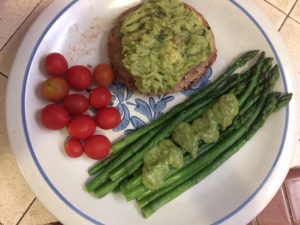 More asparagus (which is heaped weirdly and looks meager), last of the week’s cherry tomatoes, turkey burger with TJs guac. Speaking of which… 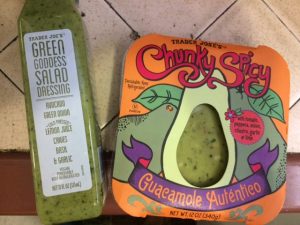 This guac is pretty decent for store-bought stuff, but the big holy-crap moment was finding this new dressing in the produce department. Super fresh, all compliant ingredients, hella tasty! (There are also Carrot Miso and… some other variety that sounded good but had sugar in the mix, which I will try once I’m done with Whole30.)

Got my grocery shopping done for next week. There was a fried ice cream truck parked outside Ralph’s.

Now I’m roasting up a chicken for tonight’s dinner and more dinners this week + a bunch of veggies for me to eat tonight. 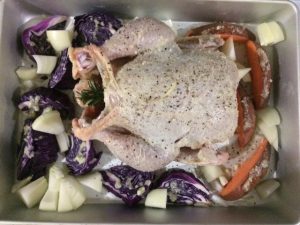 This is before it went into the oven. Once it comes out, I’m going H.A.M. on that sucker and will be done writing for the night.

Yes, my attitude about this is shitty right now. Yes, I considered saying “fuck it” several times this week. But I’m also impossibly stubborn with a vicious ego, and since I’ve come this far, the only way out is through.