ONLY 10 MORE DAYS OF THIS MADNESS.

NOTE: During the day, I write a lot of notes to myself in email drafts. I’ll often start writing the day’s blog post from those notes, and move on from there in a more cohesive way. Today… the notes were pretty fucking un-cohesive.

Skipped the carb with my post-workout meal today because it wasn’t a very strenuous workout. That may have been a mistake. 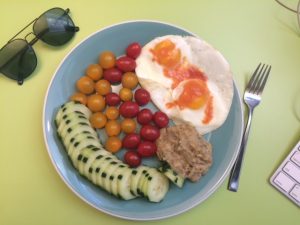 I got to work and went to assemble my breakfast… and discovered that the eggs that remained in my carton at work were NOT hard boiled. Somehow, though the shell cracked, I did not end up with a handful of raw egg, and had time to say, “fuck it, guess I’m cooking eggs now.” Also got back my abandoned baba ganoush.

I’m dreaming of a cupcake. Yesterday I watched a movie in which a character who’s recently gone vegan makes a batch of rad looking cupcakes, brings them to the office, proudly announces that they’re vegan, and everybody snubs them. I’m sitting there, looking at a chocolate cupcake heaped with chocolate frosting, knowing full well about how many wonderful vegan cupcakes are in the world, whimpering internally at all the cupcakes going to waste. And now I’m thinking of Half Baked Co., which makes amazing cupcakes with some healthier ingredients and with vegan options and THAT’S ALL I WANT, PEOPLE! (Flavor of the month is Rose Water? SON OF A BITCH!) 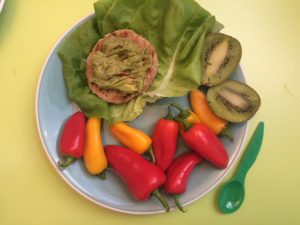 Self-explanatory meal. Now, if you’re looking at my lunch going “Dana, is that enough food?”, you’re onto something and it was not. I then mixed a bit of my ambrosial Thai almond sauce onto some leftover green pepper bits and ate that too.

Unrelated: I tried to keep an open mind about it, but no, it must be said: Hazelnut Nutpods are not hazelnutty enough. Plain coconut milk takes the cake when it comes to coffee add-ins in terms of both flavor and texture, especially now that I found that amazing brand I love. That’s going to be a thing that sticks. I might even get one of those cute creamer pourers to fill with a can of coconut milk.

Ugh. Still hungry. In-my-stomach hungry, not craving hungry or bored hungry. Had a few dried apricots and chugged some water.

On dried fruit: YOU KNOW WHAT? I went from having chocolate and other sweets most days “just because” to only having fruit-based sweets, so if having that dried fruit is feeding my sugar dragon, THEN FINE, so be it. Maybe the sugar dragon is still there, but it’s, like, the size of a golden retriever. And if you’re gonna have a dragon hanging around you, wouldn’t you rather it be a petite sugar dragon than any other kind. I’m picturing Toothless from How to Train Your Dragon, but ice blue and looking like he’s been rolled in granulated sugar like a donut. That guy sounds adorable. He can hang. But that’s not really the point. The point is that I’M DOING WAY FUCKING BETTER by having fruit and stuff instead of candy, so if I need unsweetened dried apricots to be a functioning human, then cool. I can hang with that.

FYI, I’m keeping dried fruit around after this whole thing is done, as a “FFS don’t get into the candy” weekday failsafe. But I’m also going to have chocolate. CHOCOLATE. Real-ass chocolate.

*stares into the nothingness for 5 minutes while thinking about chocolate*

I’m gonna tell you, I wasn’t sure I was gonna make it this far in. I nearly bailed right before I started. So I’m really trying to celebrate my little victories along the way.

Not enough fiberous veggies in my diet today, clearly; was hungry all day.

I’m thinking about Brown Sugar & Cinnamon Pop-Tarts right now, and I’m trying to decide whether they really sound appealing or if it’s just my nostalgic love for them.

Nope.
I just brain-tasted them, and they were amazing.
They weren’t even brain-toasted either.

(I prefer my Pop-Tarts untoasted. Unless it’s a chocolatey variety. Then it’s toasted or GTFO. Oh god, do they still make the S’mores Pop-Tarts? NO DON’T TELL ME.)

Because I wouldn’t be eating dinner ’til late, I made myself a sturdy mini-meal snack, so that wouldn’t start crying in the middle of the Apple Store or something. 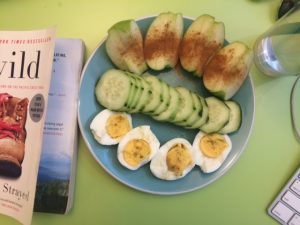 I also had a few more of my musty walnuts. 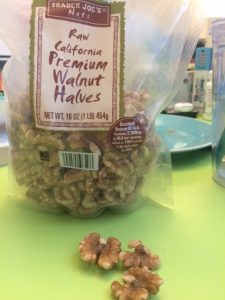 Went to the Apple Store, got my new phone, which is still trying to load all my apps and get its shit together, which is taking forever because my wifi is the worst. Finally ate dinner around 8:30. 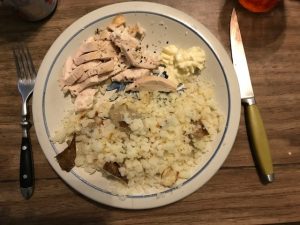 OK, I’m mortified that this ugly-ass meal was the first pic I took with my new phone, but here we are. That’s cauliflower rice mixed up with a bit of roasted potato to make it all seem more like mashed potatoes (FAIL), some of my roasted chicken breast, and some mayo. What even is this meal. Today spiraled a bit out of control, people.

And after dinner, I had some dried cherries and cacao nibs. “Cool it on the fruit, Dana,” you say? OK, maybe.