The last few days have been pretty uneventful. By which I mean I got a lot done and then hid out in my apartment for as much of it as I could.

Friday was pretty low-key. Except that I made it to a 6am spin class for the first time this year, which basically made me feel like nobody could tell me nothin’ all day. 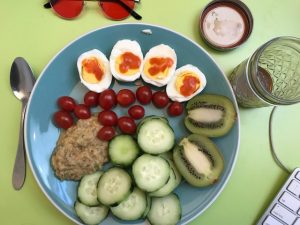 Yes, tomatoes again BUT I NEEDED TO FINISH THEM. And farewell to the last of my baba ganoush. Also, farewell to this breakfast format, as I’ve burned it out.

(HOW I’ve remained totally into and not at all sick of yogurt with Granny Smith apple, cinnamon, and nut butter almost every day for 4-ish years is beyond me.) 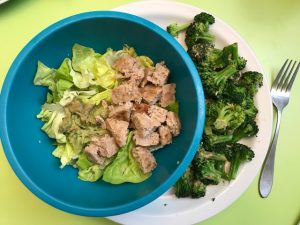 Turkey burger salad with guac. Another near-burnout. I gave up trying to DIY lettuce buns, because I’d really rather just have the burger with a salad if I’m making it myself. Plus broccoli on the side, tossed with my Thai almond sauce.

I don’t remember that afternoon. That was like several whole days ago.

I went home to cook dinner and hide out from the world and all its food and alcohol that I cannot have. Also, I had a workshop and audition the next day, so I just stayed in and did nerdy actor shit. 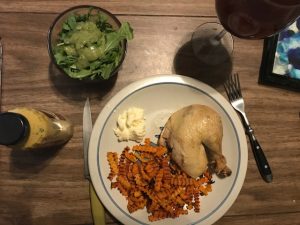 I will never burn out on butternut squash. Got a box of the zig-zag cut squash from TJs and threw it in the oven ’til the bits were all roasty and awesome. Dipped in mayo; bomb. Then more of my leftover roast chicken, plus an arugula salad with green goddess dressing. Also had some blackberry Spindrift; flavored with a bit of fruit juice but in no damn way sweet. Watched GoodFellas for the first time (GET OFF MY BACK) and jesus christ, that is a long-ass movie. How did I not know how long that movie is. It ended and I was like “SURELY my Whole30 must be done by now.”

Saturday, got up, went to the gym for a bit, came home, had breakfast. 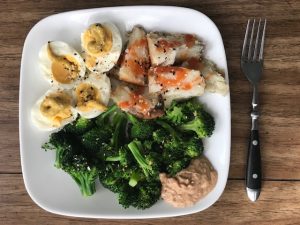 The morning light in my living room makes food look pretty great, even when it is a weird mishmosh of leftovers.

WOW. This is the most joyless I’ve felt talking about food in a while. This was a tasty and satisfying meal, but it’s made up of stuff I’m just not excited about. I’m excited to be excited about food again.

I’m feeling very Food Scrooge. Like, I wasn’t appreciating all the wonderful food options around me until I couldn’t have it. And now I’m like “TAKE ME BACK, SPIRIT, I’VE CHANGED!” I’ll treat myself to the special stuff now and then instead of just waiting to have someone else with me to make it “worth it,” because I’m “worth it” on my own. I’ll stop giving myself junk treats because I want something good but feel like I should save the good stuff to enjoy with other people, inevitably meaning I don’t get them at all. And I don’t mean good like fancy or expensive. I just mean good like treating myself to a piece of pie once instead of a bunch of junky snacks all week long.

Had a snack of the rest of my dried apricots, a meat stick, and some almonds to stave off the crazypants feelings before I headed to my audition. Because the last thing I need on top of pre-audition adrenaline is low blood sugar. 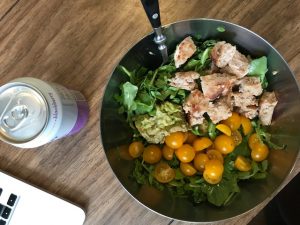 I was annoyed at this meal, because I had to go home and eat it. I had stuff I wanted to go do out and about, but I couldn’t because I needed to go home and have a meal, because I can’t trust anything out in the wild. Made a salad with turkey burger, guac, the last of my yellow tomatoes, and more of the arugula, which smelled like it might be on its way out, but looked OK enough, so I ate it.

Yeah, that going-bad arugula did not go over well. My afternoon was a sour mood with sour guts.

Yesterday was another day where I nearly chucked it all. I was sad, my insides were cranky, and all I wanted was some ice cream. Nothing in the whole wide world sounded as good to me as ice cream did. Chocolate ice cream, and not even the premium stuff; the kind that has a ton of air pumped into it so it scoops all fluffy and you can eat half a 7-serving carton without realizing what you’ve done. But I didn’t do that. I just laid around being a bum without ice cream. 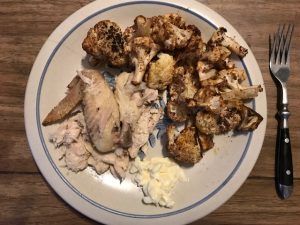 There’s no excuse for this meal. The last of my roast chicken, the cauliflower I’d been avoiding cutting and cooking all week (I cooked it with the spices from the Red Roasted Carrots and, hot damn, so tasty but not pretty), and mayo. Sidebar: THE ART COUPLE at Sacred Fools Theater Company is frickin’ delightful, and you should get your ass over to see it.

This morning, Sunday. Got up early so I could do the grocery shopping I put off doing yesterday in order to lay around on the couch. Then had breakfast: 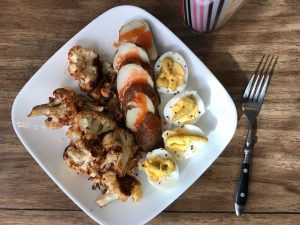 That cauliflower is prettier in my good morning light. And last hard-boiled eggs for a bit!

Got to an early callback, then ran some errands, which I could do, because I had brought my lunch with me, since theatre callbacks can generally take anywhere between 10 minutes and 4 hours. 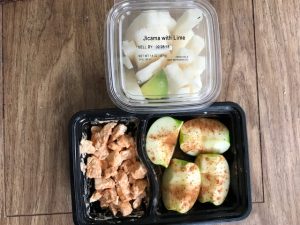 The apple was eaten in my car on the way back to the Valley; the rest was not eaten ’til I got home. Treated myself to a snack pack of jicama when I was on my early grocery run. Jicama is in the category of raw veggies that I can tear through mass quantities of in a single sitting.

Also, I choked on a piece of jicama, and it occurred to me that if I died choking on crudités alone in my apartment, I would basically be mortified for my entire afterlife. I would never after-live that down.

And then I did a butt-load of cooking! YAY! My last massive prep day of Whole30! I’m over the last hump!!! IT’S ALL GRAVY FROM HERE ON OUT.

(DON’T THINK ABOUT GRAVY, YOU IDIOT.)

This week, I’m pulling a total change-up from my recent food routine, which is good, because that shit needed changing up.

One of the wild things about Whole30 is that you can spend all afternoon cooking, then look around and wonder, “Shit, what the hell am I going to eat right now?” 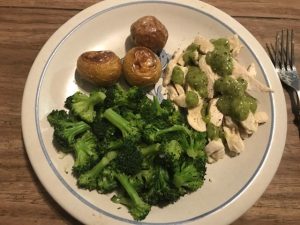 I did have one more potato in addition to this. They’re the little gold potatoes, the ones that taste almost buttery even without butter. Friggin’ magic. Then the last of my leftover broccoli with ghee and the last of my TJs Just Chicken with more green goddess dressing because I couldn’t bear to hit it with the Frank’s RedHot.

Now I’m going to go fold all the laundry I did today (AND I washed dishes! I cleaned ALL THE THINGS! Ok, not all the things…) and keep watching One Day at a Time (another Netflix reboot that happens to be goddamn magic).

THE FINISH LINE IS IN SIGHT! THE HARD PART IS OVER! HOME STRETCH BABYYYYYYYYYY!