I WILL ATTEMPT TO BE BRIEF.

(Put it on my headstone.)

This morning, I awoke to weird thumping noises in my building that rattled me enough to get my heart rate going so that it took a full hour to fall back asleep. But right after I launched into consciousness, one of my first thoughts was “What if I made those chocolate-puff-pastry cinnamon roll hybrid things but used marshmallow too and got a s’mores vibe going on?” I’mma do it, mark my words.

Worked out, then had a mini meal of some deli turkey and a couple mini potatoes.

Then this morning, I tried out my new experimental breakfast… 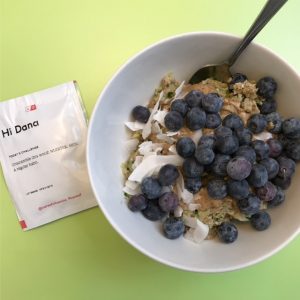 I was checking out this recipe a few days back, thinking it sounded pretty good… but could use some adjustments to fit my needs.

So I modified. And folks, IT IS SO GOOD. I’m not gonna lie, this breakfast is weird AF, but it totally works. It tastes like zucchini bread meets banana bread meets blueberry muffins meets bread pudding, only minus all that bread stuff. I was full. I was satisfied. And I stayed that way for a while. I told Donnelle about this; her reply…

“I may not know what the future holds, and we may be dead by tomorrow, but damn if I’m not going to feel full for at least the next four to five hours.”

That’s the credo of this breakfast. I told everyone about it. I bugged all my coworkers. I told my very healthy boyfriend about it, and he wants to try it.

I’ll drum up a for-real followable recipe for the thing later in the week; I made a double batch today (because 1/2 banana), so the next time I cook it, I’ll note how much cinnamon I think should go in. The rest of it is pretty straight-forward though.

(“How’s your attempt at brevity going?” AWESOME THANK YOU FOR ASKING.) 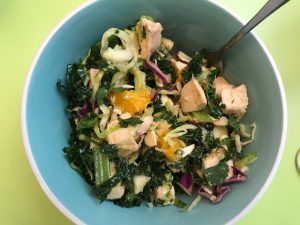 I made another recipe! And when I say that you know it means I loosely followed a recipe and changed it where I saw fit. This was what I started from.

Why would I spend a bunch of time shredding cabbage and other veggies when slaw mixes like Trader Joe’s Cruciferous Crunch Collection exist? I wouldn’t.

I didn’t marinate the chicken; I just salted it and cooked it. It’s fine, it gets coated in that dressing eventually anyway. And I just roasted it up instead of grilling or pan-frying.

Ah shit, I forgot to add sesame seeds. Hmm. I can still do that.

I did make that dressing right though! Except I used garlic powder instead of onion powder because I didn’t have any. 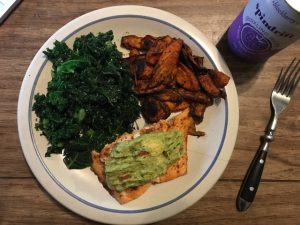 Some baked salmon with a bit of kefta spice rub topped with guacamole (YUM), garlicky sauteed kale in coconut oil (YUM), and THE GREATEST CARROT RECIPE IN THE LAND (obvious YUM). I’ve mentioned it before, but in case it didn’t land, FFS, people, make this recipe right goddamn now. Quit fucking around.

Also, right when I got home, I did this 10 minute dance cardio video that my friend Natalie found online. It was very fun, and reminded me that one of the wonderful things about living alone is the ability to dance very, very awkwardly in a private setting, away from people who are dicks (or who I’m just afraid might be dicks). 10 minutes of gyrating around was a really nice refresher after a day of desk-jobbing and cross-valley commuting.