I have just about reached the end of February. Tomorrow is Wednesday. I’m three days from the end.

“Dana, we know this. Calendars are a thing. Are you stalling because you don’t have shit to say?”

I didn’t even take many notes today. I’ve got my recipes for the week pretty well sorted and stabilized; it’s too soon for me to be sick of them already. I’ve been busy enough with other stuff that it’s kept me from stressing too hard about what I can or cannot eat.

This is the only note I made today:

(OK, maybe there’s always enough of my brain left to stress about food a little.)

I’m planning to reintroduce dairy on Saturday — nothing crazy, I just want my yogurt back. BUT there is a bit of worry around it, because I’m flying to Sacramento first thing Saturday morning, and the plan of “eat your first dairy in 30 days then go get on an airplane” sounds like a recipe for digestive disaster. So I’m going with goat-milk yogurt, which is lower in lactose; I don’t know why I wasn’t planning on that to begin with, since I am interested in reducing cow-milk dairy to begin with.

Usual morning routine. And as much as it’s boring to write about doing the same thing every day, I’ve re-established a healthy morning routine, and that was one of my big goals, so Good Job, Dana — you’re back to being healthy and boring in the morning. 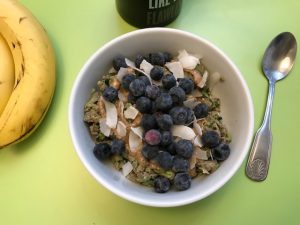 I’m happy to say that the base for this breakfast that I cooked up yesterday reheated quite nicely. And thank god it gets topped with the pretty coconut and berries, because the base is this grayish, brownish, greenish ugly mess that is 0% appealing to behold. I know how good it tastes, and when I brought that mess out of the fridge, I was like “OH LORD, I’M EATING THAT??” But I did, and happily.

… JK, I apparently forgot to snap a picture of my lunch because I was very hungry. But it was that same salad from yesterday, plus the last of my jicama sticks from Sunday.

Apple and sun butter for a mid-afternoon snack. I’ve almost decimated the jar of sun butter nobody but me likes at the office. My opinion on the stuff was, “Well, it tastes OK, and it’s free, so…”

Since I didn’t have a picture of my lunch, here’s a picture of this obscene rolled ice cream thing that my friend texted me yesterday: 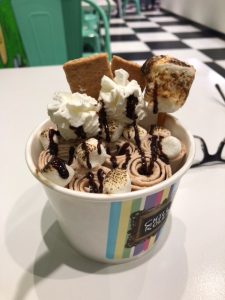 I KNOW, RIGHT? And this shop is apparently in my neighborhood! GODDAMMIT.

I’m going to eat the hell out of this once I’ve eased back into dairy. 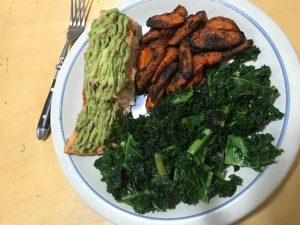 Oh hey, it’s that same thing as I ate yesterday! Whatever, still delicious.

And then, I went to meet up with a friend. We were trying to decide where to meet up in North Hollywood. I didn’t want to go to a bar, and a full-on dinner meeting wasn’t necessary. It would be late in the evening for coffee, but tea would be great. Where could we go to grab a cup of tea and chat in North Hollywood?

And then I realized where to go.
Republic of Pie.

I told my friend, and she (knowing my situation) said, “You’re so brave.” To which I said, “I work in an office full of food 5 days a week. This is fine.”

The thing about putting your head into the lion’s mouth is that the person who the head belongs to — they’re the one calling the shots. They’re making the move. They know the danger and are proceeding anyway, because they’re pretty sure that they will emerge unscathed.

And so I did. A few furtive looks at delicious pies, eclairs, and macarons, but then we got our teas, and sat down to gab. And I completely forgot I was even in the lion’s mouth.

But believe you me, I’m going back into the lion’s mouth for that eclair.