Today was weirdly hard considering I’m 2 days ’til the end. I was hungry most of the day today. Like I’d eat my meal — a meal I’ve eaten before and has filled me up previously — and felt nothing but weird lingering hunger. But I know well enough to know that it wasn’t really hunger; it was SATISFACTION that I was lacking. I couldn’t get no, essentially.

I was all proud of myself for getting up good and early and writing before working out, showering, and getting to work. I was feeling like a rock star, and made myself some breakfast. 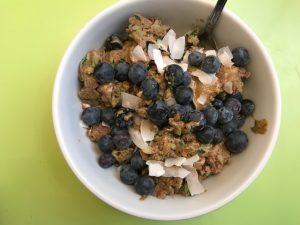 This again. Had it around 10am. Still super tasty, and I felt full afterward.

Hmmm. This is no good.
It’s 11am, and I’m getting HUNGRY.
It has not been that long since breakfast.
I had my post workout snack of a couple slices of deli meat and a couple li’l potatoes.
I had my coffee. I’ve had some water.
Hmmm…

I’m gonna have some more water; that might be the problem.
(It helped a bit.)

Made it through to lunch. 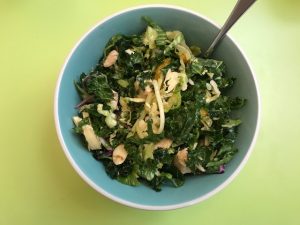 Never really stopped being hungry though. Like, I sense that there is food in my stomach, but it’s not satisfying my need, my wanting.

Chugged some water. It seems to have filled in the spaces around all the damn raw veggies I ate. DAMN YOU, SLAW, you unsatisfying shredded bastard!

Mid-afternoon. Had my apple and almond butter + more water… and while I’m not hungry-hungry, I’ve still got that brain-nagging dissatisfaction that’s been poking at me all day.

Delicious items are being tried on camera in the other room. My boss and coworkers are losing their minds over these sweets. Is 28 days as good as 30 days? (UGH.)

An hour since my snack. Real-people hungry. Having an Epic bar. Feeling in need of protein. This was helpful. Also helpful because the saltiness inspired me to chug a bunch more water too.

One hour later and HOW AM I HUNGRY AGAIN???

I make it home and it’s a good thing I’m hungry because I need to wolf down my food and get back out the door. 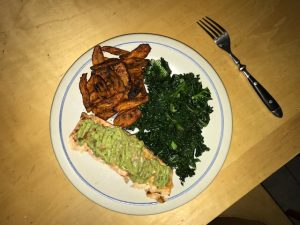 I resorted to using a flash, which made my dinner look all weird and like it’s in the 70s. Whatever.

Now it’s late, I got a lot of shit done today, I’m having some tea, and I’m going the fuck to sleep.

(Also, I bought myself a couple of items today to eat on Saturday — the really good Capretta goat’s milk yogurt, and chocolate covered banana bites for airplane treats. Easing myself back into sugar and dairy. Also grabbed some Tums and Lactaid because I am NOT about to be miserable this weekend.)