Let me introduce you to a little something called Obliger Rebellion. It’s real.

But while I put all this massive pressure on myself to make one final monumental, analytical post, you know… that’s dumb. And I’ve also discovered that I’ll very likely be posting again after a week off of this, so, it ain’t over. 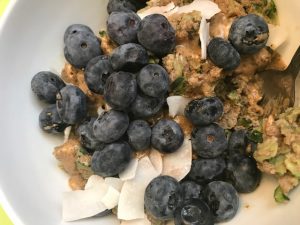 My final weirdo breakfast bowl. This wacky bitch will probably show up in my future, just because I genuinely enjoy it.

I straight up forgot to photograph it. I finished the last of my slaw, but avoided becoming cranky. Good for me.

I had an apple and some almond butter in the afternoon because I was going to get my hair cut after work. Thus, dinner was later than usual and I was goddamn starving by the time I got home. AND some motherfucker was parked in my parking spot, which is NOT what I wanted to come home to after a day full of driving in rainy LA traffic. Luckily, my haircut was so good that it quelled my anger. 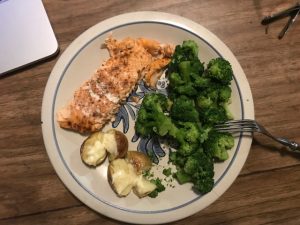 Finally, here’s what I jotted down during my final day of Whole30, Friday, March 2nd, 4 days ago.

People keep saying to me “Ooh, I could NEVER do that.”
Bullshit.

Here’s the thing: I’m not a super disciplined person; I am super stubborn. I found loopholes, but I tried not to use them too much. It’s not that hard. I promise. Sure, it’s a pain in the ass and requires a lot of planning, but it’s not that hard.

I forced myself to let go of tracking my calories and macros on My Fitness Pal for the month, because I knew it would make me antsy and fat-phobic. (FYI, I just ran the nutritional info on my favorite breakfast today, and am glad I didn’t check prior to now.) I stayed off the scale (for the most part) because I knew that this meal plan is not about losing weight, it’s about making more nutritious choices, and I’ve done that. Good Job, Dana.

But in order to balance out letting those things go, I got my ass back in gear on exercise. Nothing overboard, because — let’s be real — I frankly didn’t have time to go overboard with all my other commitments + cooking, cleaning, shopping, and writing this blog, which ended up taking way more of my time each day than I’d initially planned. And you wanna hear something funny? It was much easier to stick with exercising in conjunction with Whole30 than with my usual lifestyle. Why? Because I was never hung over. Because I was never feeling bogged down by something crappy I ate. I was never feeling all off-kilter because I’d eaten a bunch of sugary junk the night before which screwed up my sleep and made me need to sleep a bit longer rather than get up and exercise.

(Alright, I can play all I like that the food made the big difference there, but I’m pretty sure most of it can be credited to not drinking booze.)

So now, I’m embarking back into a more fitness-based phase. My new mission is to remain eating healthy + high in nutrients for the most part, but also allow specific treats now and then. Because while this was great for shaking the bad shit out of my life, if you don’t have fun now and then, you run the risk of becoming an antisocial killjoy hermit surrounded by a protective moat of kale around you.

I’ve also learned to keep alternatives around. I’ve been good about keeping snacks on hand for a while, but this kicked up my game. And sometimes a non-candy alt for candy won’t do… so have a better-for-you candy around. I’ve got a bag of dark-chocolate covered banana bites burning a hole in my brain right now. And while there is the “chocolate is chocolate” mentality, I will feel a lot better about popping a few of those, or my favorite chocolate covered almonds, rather than chomping down a Milky Way Midnight just-because.

BUT this has been an eye opener in the realm of “it’s not that hard to make sure you’re eating veggies.” And since my good friend and coworker Gina just started a round of her own, Whole30 will not be far from my consciousness. My new role in her Whole30 journey is now that of Veggie Bully. Vegetables are not Gina’s favorite, so I’mma be hounding her (lovingly!) to make sure she’s not just skipping them, while also giving helpful tips on how to add in vegetables in a way that doesn’t make her want to go “UGH SCREW THIS.”

OH MAN, I super miss being able to not-think about food. I mean, I think about food a lot all the time anyhow, but this had me in prep ‘n plan ‘n time mode all day. Especially difficult on weekends when you’re out and about and just want to live your life, but you’re like “Naw, I gotta go home and eat a salad because I can’t trust chicken that anybody else cooked, since you bitches are trying to get sugar, soy, and sulfites into basically everything.” I’m excited to dine at the healthyish places I enjoy, like Tender Greens and Lemonade.

(OK, fine, I also can’t wait to have a proper burger and a goddamn pastry.)

and of course,
musty nut meat

Whatever. This isn’t over. Because now that I’m a few days post-round, I’m learning that this transition is anything but straightforward…